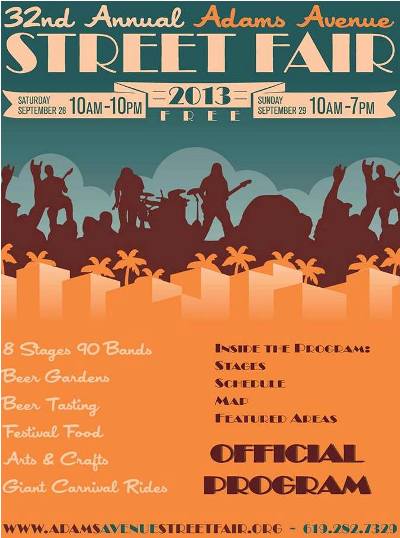 The 2013 annual Adams Avenue street fair is this weekend, join us September 28th and 29th for southern California’s largest FREE two day music festival hosted by the Normal Heights, Kensington Heights, and University Heights communities. Festival hours are 10am-10pm on Saturday and 10am-7pm on Sunday. The fair transforms Adams Avenue into a smorgasbord offering of fantastic musical entertainment, shopping, and vendors for all ages, all weekend long!

The musical line up offers a mix of blues, folk, traditional roots music, Appalachian folk songs, bluegrass, Americana, cowboy, Cajun, rockabilly. A special collaboration by the pioneering San Diego band Los Alacranes and two members of Los Lobos is just one of the musical treats in store at the 2013 edition of Adams Avenue Unplugged. Top Bands at the 2013 Adams Avenue Street Fair: 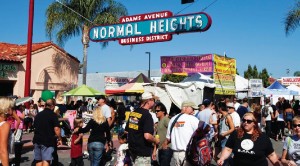 In addition to the excitement of the musical performances, the festival features beer gardens and a beer tasting area. The festival also features more than three hundred food vendors, arts and craft specialty vendors and giant carnival rides. The festival is presented with great thanks to the Adams Avenue Business Association, a non- profit organization whose goal is to promote increased commercial activity within the Adams Avenue Business District. This is an event for everyone, with many types of music, food, drink, and fun so don’t miss this year’s festivities; enjoy local bands, brews, food, and fun in support of your community.