Published by sandiegovips On December 28, 2012

Just in case you haven’t made those San Diego New Year’s Eve plans yet, here are the top San Diego New Years Parties NYE 2013! We’ve compiled some of the hottest New Year’s parties going down in our finest city. Check out the schedule and information about the events below: 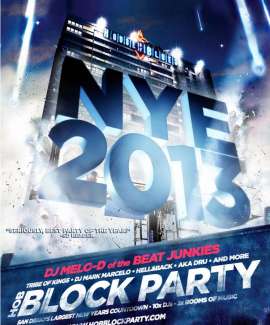 Description:  With over 30,000 square feet, San Diego’s biggest New Years party celebrates with world renowned Beat Junkie DJ Melo-D. So join our 10 DJs, dancer performers, and our lavishly dressed masquerade hostesses as we celebrate the future in the halls where history is made. Get ready now!

What: LITTLE HURRICANE, GET BACK LORETTA, BLACKOUT PARTY, THE CREEPY CREEPS

Description: The Casbah Presents New Year’s Eve 2012/2013 at the Lafayette Hotel, featuring Little Hurricane, Get Back Loretta, Blackout Party, the Creepy Creeps, Shake Before Us, the Amandas, Creepxotica and more. Tickets are currently $25 and hotel packages including two tickets start at $229.

Description: Join over 2000 people as they ring in the New Year in style at the Broadway pier “the Pavilion”, the finest venue in San Diego. Purchase your tickets early, the price goes up as we sell more tickets; this party will sell out!! 3 ballrooms of entertainment. DJ’s Spinning Retro/Disco Music during and in between live event to keep the party going non stop. Live bands Cameo, Angela, Winbush, Jay Lamont. Price: $50 – General Admission $150 – Premier Seating. Benefit Concert to support Cancer Society on behalf of Lulu’s Hands of Hope. 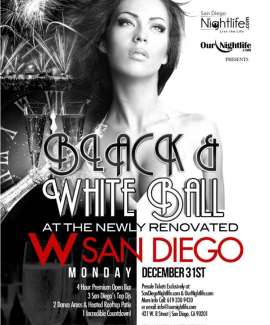 Description: Revel in the electric energy of W San Diego ring in 2013 with style and splendor.  join us in the innovative heated rooftop patio, upstairs bar & lounge, and grand room. don’t miss the luxury and the life that we all want to experience this new year’s eve. 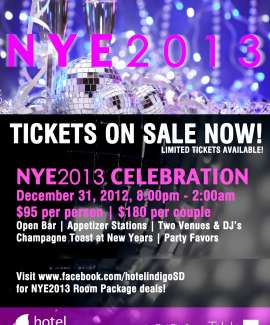 Description: Celebrate New Year’s Eve 2013 at Hotel Indigo and take advantage of an open bar with appetizer stations, two venues with DJs, and fantastic room package deals. Tickets are on sale now–$95 per person or $180 per couple.