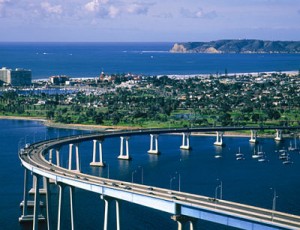 Across the soaring bridge from downtown San Diego is Coronado, a relaxed Southern California beach town, boasting one of the world’s best beaches, endless sunshine, and a bayside overlooking San Diego’s skyline. Although frequently referred to as an island, Coronado is actually a peninsula connected to San Diego to the east by the San Diego-Coronado Bridge and to Imperial Beach to the south by State Highway 75. Coronado’s mile-long main street is a pedestrian’s paradise, and its tree-lined neighborhoods are an explorer’s delight. Named one of the Dozen Distinctive Destinations and given the Great American MainStreet Award, Coronado’s setting invites distinctive boutiques, parades and picnics in the park.

Of course the most famous Coronado landmark is the Hotel Del, with its red roofs rising over the white sand beaches, and the site of the filming of the Marilyn Monroe classic movie, Some Like it Hot. Just down the strand, is also the Loews Coronado Bay Hotel, a luxury resort in a premier location, featuring fine dining, tennis courts and even offering Gondola cruises through the enchanting canals and waterways of the Coronado Cays.

Around the Island, as it is called, outside of the hotels, restaurants such a Peohe~s, Candela~s and the Brigantine are popular eateries for dinner and cocktails, or try Tartine for breakfast.

A day out in Coronado:
Coronado hosts a wide array of beach areas for the tourists. The beach area of Coronado is famous in the whole USA because of the diverse type of activities it offers for the tourists. From spending the days under the sunshine to take a bike ride for a tour around the island; the sandy beaches of Coronado will never make you disappointed when you decide to spend your day there.
Not in the mood to spend the day at beaches, Coronado has the amazing downtown to entertain you all the day. Your day can end up by discovering lots of local surprises when you are wandering around the orange avenue of Coronado. It is the central street of Coronado where you are going to get a huge line up of restaurants, shops, art galleries and theaters. The sparking destination of Orange Avenue is the Coronado Historical Museum.

The urban entertainment does not end here! Another bundle of local attractions is waiting for you at another end of the Coronado city. It is the Coronado’s ferry landing of the island that offers you the most attractive places for the tourists. The area offers you more than 20 shops that are full of amazing local products.Also, you will get the lineup of a lot of art galleries and restaurants that offers the view of the skyline of a Diego’s downtown. There is also a very low cost ferry service at the flagship cruises through which you can travel across the bay of Coronado towards the Seaport Village.