It’s baseball season and we’re more than ready to route our San Diego Padres on for what’s sure to be a great year. The team will open the 2012 season at home on Thursday, April 5, beginning a four-game series against the Los Angeles Dodgers. Following the opening series, the Padres will have an off day on Monday, April 9 before hosting the Arizona Diamondbacks for three games. After a six-game road trip through Los Angeles and Colorado, San Diego will host the Philadelphia Phillies (April 19-22) for the final weekend series in April. 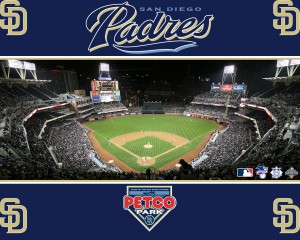 Interleague play in 2012 will bring the Los Angeles Angels of Anaheim and the Texas Rangers to San Diego, with both teams making their first-ever visits to PETCO Park, which opened in 2004. The Padres will host the Angels May 18-20, while the Rangers come to town for a three-game set June 18-20. There will also be three games in Oakland against the Athletics (June 15-17) and six games against the Seattle Mariners, three at Safeco Field (June 12-14) and three at PETCO Park (June 22-24). The Padres home season will wrap with the team hosting the Dodgers (September 25-27) and Giants (September 28-30), before they head out on the road for the three final games of the regular season in Milwaukee (October 1-3).

Now’s the time to grab your season tickets, or individual game tickets to secure a spot to watch the Padres in action! Below is the released 2012 season schedule for the Padres. Click on the view tickets link on the right to purchase your tickets for the games you want to see. We’re keeping our fingers crossed for a good season, now let’s show our support!