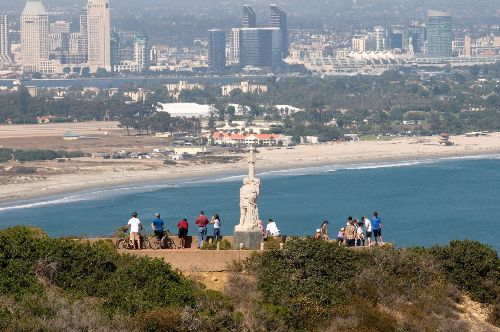 The best known landmark in Point Loma, the Old Point Loma Lighthouse, is an icon occasionally used to represent the entire city of San Diego. This lighthouse is located within Cabrillo National monument which was discovered by Juan Rodriguez Cabrillo. Point Loma offers stunning ocean views from this highest point. The neighborhood is hilly and scenic and the area is also home to Naval Base Point Loma and Fort Rosecrans National Cemetery. Original military barracks have been converted to a shopping center, Liberty Station, where the famous Corvette Diner has been relocated to, and there are many eateries such as Tender Greens and a wine bar, Wine Steals where guests can relax on the patio or enjoy wines at the indoor bar.

The bayside hills between Rosecrans Street and Chatsworth Boulevard north of Nimitz Boulevard are known as Loma Portal. A distinctive feature of this neighborhood is the location of street lights in the middle of several street intersections instead on the sidewalk. Loma Portal lies directly in the takeoff pattern for planes from Lindbergh Field, making it the home of the “Point Loma Pause” where all conversation ceases temporarily due to airplane noise. The east-west streets in Roseville and Loma Portal are known as the “alphabetical author streets”. The streets are named for authors in alphabetical order from Addison to Zola, with a second partial cycle from Alcott to Lytton.

Things to Do and See in Point Loma:

Marine activities are mostly located on the Bay side of the peninsula, where there are three yacht clubs, including the San Diego Yacht Club which was home to the America’s Cup from 1988 to 1995. There are several small-boat marinas and a commercial sport fishing dock on the Bay side. There are other businesses related to yachting and fishing, such as marine supply stores, yacht brokerages, boat repair yards, and hotels & motels catering to fishing enthusiasts. Some restaurants and hotels have docks for customers who arrive by boat.

Tourists visit the cliffs on the western side of the peninsula for views of the ocean and the sunset – hence the name, Sunset Cliffs. There are surfing spots below the cliffs, such as Luscomb’s, Garbage Beach and New Break. The Point Loma area has a number of hotels, restaurants, and local businesses. Located in the Voltaire business district, near Ocean Beach, is the Point Loma Youth Hostel, frequently visited by travelers from around the world. Also the San Diego Sports Arena and the SOMA concert venue are located in the Midway neighborhood of Point Loma. Point Loma is famous for San Diego sports arena, situated in AKA Valley View Casino Center. It is an indoor sports arena, located on the sports arena Blvd in Point Loma.

The point Loma neighborhood holds a lot of attractions for the tourists. On the upper point of this neighborhood, you will find the sight of the multi-million dollar mansions, the views of coastlines and cliffs from the top.
Point Loma, San Diego

The tourists can pay a visit to midways, where you can find the city’s largest swap meet in the weekend at Kobey’s Swap Meet. People also love to visit towards the ocean beach side where you will find a nice surfing spot. The harbor side of the coastline is the safe house for the yachts.

One of the best attraction of point Loma neighborhood is tide pooling for which the place is locally famous. The low tide of the underwater reef helps the visitors to get a magnificent sight of the sea creatures and delightful views of underwater. Also, there is the Liberty Station that is located in the waterfront urban village. The village was later redeveloped as a naval training center and that is why it is the home for various hotels, restaurants, shops, waterfront parks, Historic Sail Ho Golf Course and the NTC.