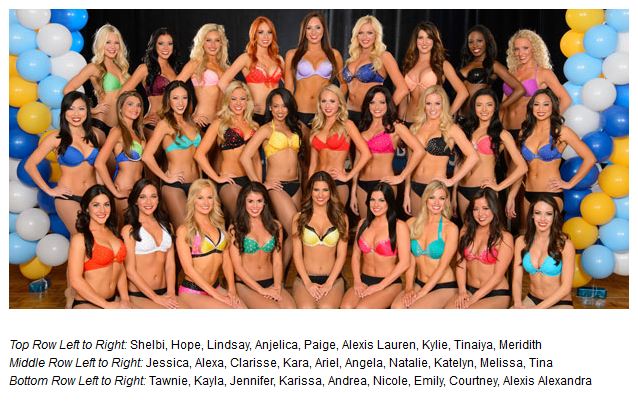 The only thing that gets us to turn our heads more than the San Diego Chargers are those Charger’s Cheerleaders. The Charger Girls uphold a high standard of quality dance performance and community involvement. The Charger organization feels strongly that the cheerleaders should complement the professionalism represented on and off the playing field. Notable Charger Girl Charisma Carpenter went on to play a lead role on several very successful TV shows.

Auditions were held for the 2013 team in April of this year, during the preliminary audition process, applicants are judged on dance ability, crowd appeal, showmanship, and individual applications. For finalists, there is an interview process and a final dance audition. The competition of auditions was intense as over a thousand talented ladies cheered to gain the title as a Charger Girl. With job perks like the thrill of performing in front of over 65,000 fans, performing at Chargers home games in Qualcomm Stadium, participation in the annual swimsuit calendar photo shoot, recognitions as ambassadors for the Chargers organization as well as the San Diego Community local & national media exposure, working with many of the nation’s top choreographers, benefitting charity by doing what you love, and getting up close to the Chargers, it is no wonder the auditions alone are so fierce! The new 2013 Chargers Girls are a squad of thirty talented, athletic, and gorgeous California girls. Charger Girls emerged are some of the most talented and not to mention the hottest of the NFL squads. 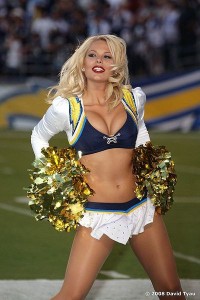 In early September the Charger Girls 2013-2014 Calendar was unveiled at the House of Blues of the Gaslamp District in San Diego. The calendar features beautiful photos of the girls in studio and in action on the field, and is now available through the Chargers website. The Charger Girls keep busy all season making general and performance appearances.When the Girls aren’t busy entertaining off the field they are busy practicing competitive routines to keep the energy high for Chargers and Charger’s Fans every home game. Watch the Girls for yourself at the next Charger home game, September 29th against the Dallas Cowboys at Qualcomm Stadium!