What: Free Birthday Comedy Show
Where: Mad House Comedy Club 502 Horton Plaza (top level) San Diego, CA 92101
When: Friday January 4th 9:30 pm
DETAILS Come early to get a good seat, Come hungry, cuz the food is great.
4 hours of FREE validated parking
[important]RSVP to get FREE entrance on the SanDiegoVIPs List : http://www.facebook.com/events/338212332953675/[/important]
If you’re looking for something a little different than the old standbys of dinner and a movie or meeting for a drink, a comedy club is a great place for a date. If it’s a first date, it’s a chance to get to know the person a little beforehand, as well as get an inside look at what’s makes them laugh – a sense of humor is always a good quality. Plus, instead of trying to avoid awkward conversation throughout the duration of a meal, the comedians will make sure you are entertained.Mad House Comedy Club is at the top level of Horton Plaza near the Gaslamp District of San Diego. It’s a great space that serves some pretty decent food with options like burgers and nachos, but also fancier selections like steak and salmon. Anyone who is familiar with the downtown area knows how much of a pain parking can be, but fortunately, Mad House will validate your parking for up to four hours, which is plenty of time to eat and take in a show.The night of hilarity will be Headlined by the incomparable Paul Ogata……….. 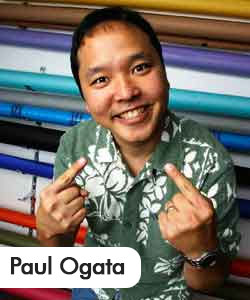 Paul Ogata: In 2007, Paul Ogata swept to victory in the prestigious San Francisco International Comedy Competition. In doing so, he joined the exclusive club of comedy greats such as Dana Carvey, Sinbad, Doug Stanhope and Jake Johannsen. Paul’s animated stream-of-consciousness style has been called “Astoundingly Funny” by TimeOut magazine, while the Pacific Daily News says that Paul “makes you think while making you laugh.” Paul headlines shows around the globe from Hong Kong to Hollywood, from Tokyo to Times Square. In between, he finds time to make television appearances on programs such as Comedy Central’s Live at Gotham, Showtime’s Pacific Rim Comedy, CBS’s The Late Late Show, Comics Unleashed and many others. Paul also co-starred with Ron Jeremy in the movie “Porndogs: The Adventures of Sadie”. Porndogs played the festival circuit in 2010, picking up several awards along the way, making Paul Ogata the only award-winning comedian/pornstar you’ll likely see! Here’s what people are saying about Paul Ogata: “Paul Ogata kills!” — LiveComedyLA “This crazy dude is well worth seeing!” — Monterey County Weekly “Irrepressible… never short of laughs” — Honolulu Advertiser “His cherubic grin belies a wickedly funny streak” — South China Morning Post