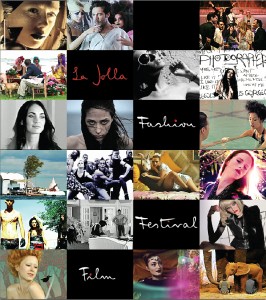 programs 8:00 – 10:00pm July 26, 27 & 28th 2012 in the world class theater at the Museum of Contemporary Art La Jolla. Each night consists of about 20 short films. The Festival centers on a digital vision set in a world class coastal resort – utilizing exclusive screenings held in the center of the “Village”, fashion webcasts, seminars and panel discussions, film debuts, industry networking, deal making, after parties, and more.

LJFFF brings together style icons, directors, actors and fans for a variety of short film screenings, industry mixers, panel discussions and of course, after parties. Don’t miss out on the official after party at Barfly, each of the three nights, starting at 10PM. LJFFF all access passes are available for $200. Individual film screening tickets can be purchased for $75 per day. For more information, visit ljfff.com.